Once you sign up for a plan, you would be provided with an API Key. Please ensure that you do not share the API key with anyone. In order to use the APIs inside an application, you need to pass the API Key in the header of the request. 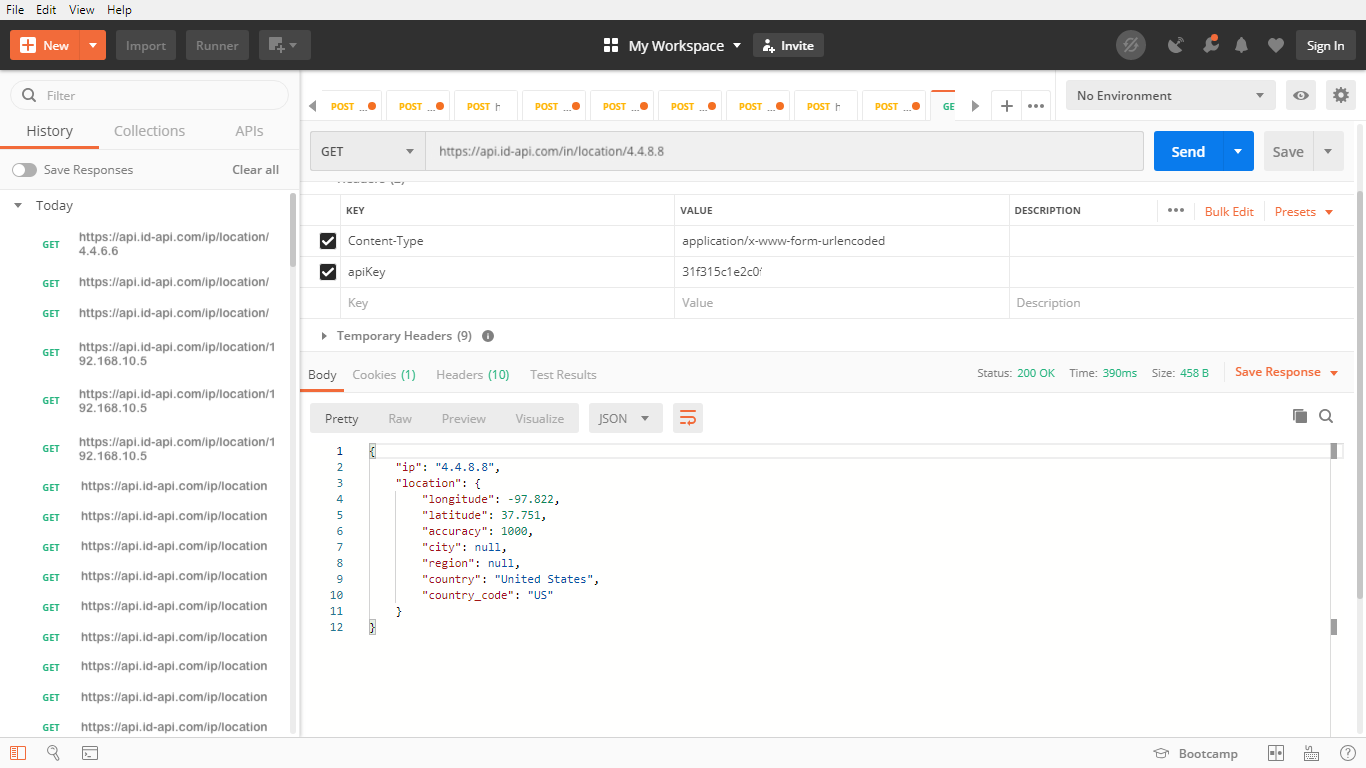 ID API’s enterprise-grade Email, IP and Phone Number validation capabilities are compatible with all programming languages via an API.

Our solutions are made for applications that are in need of real-time customer data validation, our real-time validation API is the perfect choice for the same. The various endpoints in our API are available through the very easy to implement GET method for developers.

Currently the API supports only IPv4 addresses. Work is in progress to cover IPv6 ranges as well. Please consult this ID API API documentation page for further information on when IPV6 addresses are going to be supported in our endpoints. The following are our two endpoints for IP address queries

If you don’t pass IP address we will return the result for your public IP. As IP ranges are announced on a daily bases, we are trying to keep our database as up to date and accurate as possible. All IP locations are approximate and should not be treated as exact house address. The fact that IP ranges assigned from RIPE (European IP Registrar) could be announced for use outside Europe makes it really hard to trace. We can’t rely on the registered address of the ASN either as more than likely some IP addresses will be allocated for use outside their city or even country. For this sole reason we are using third party locations list that is kept updated.

you will need to send GET request to

The response would be a JSON object containing the IP address along with another JSON object for its location. For example please take a look at our response object for the above query.

The location object has the following key/value pairs

As we all know locating an IP address doesn’t solve your problems especially if you are in the online business and you’re trying to identify potentially fraudulent transactions. This was the reason why we created an API endpoint to give you full and detailed information about IP address. In order to perform the IP address health check query you need to make GET request to

If you don’t pass IP address we will return the result for your public IP.

By querying this endpoint we will perform the following three health checks:

Same as with all other endpoints, if you don’t specify IP address we will return result for your public IP address. This endpoint maps IP address to ASN and gives you the following information:

followed by the email you want to query. For example to perform an email health check on

you will need to send GET request the following URL

By querying this endpoint you will get detailed overview on the health of the email your interested in. We will perform the following four important checks:

Phone number validation endpoint is a powerful tool to help you filter out invalid numbers. It will validate wide range of both national and international numbers worldwide. Use it with landline, mobile, toll free, VoIP etc. For example today a valid mobile number is required within the registration process in some platforms, then SMS is sent and user have to type it in to complete its registration. Allowing invalid numbers can increase the number of bogus users, abandonment of registration and it will costs more to send SMS to invalid numbers that wont be delivered. At very least using ID API Phone validation endpoint will help differentiate between mobile, landline and other types of phone numbers.

Normally international phone numbers start with either 00 or + then followed by the country code and the phone number. In almost all cases the leading zero from the local phone number is dropped.

If we are to validate +442012345678 then we need to send GET request to api.id-api.com/phone/ followed by the phone number, and the final URL will be

From the JSON response we can see that this is a valid fixed line number, located in London. We can also see that its timezone is Europe/London.

National or local phone numbers can be also used for validation. In order to validate such numbers a two letter country code in ISO 3166 format is also required. For example to validate the following Irish mobile number 0831234567 we need to send a GET request to api.id-api.com/phone/ followed by the country code IE and then 0831234567.

From the JSON response we can see that this is a valid mobile number, located anywhere in Ireland, and its carrier is 3. We can also see that its timezone is Europe/Dublin.

In some countries people can switch carrier and keep their number, in such cases the result in carrier field indicates the initial issuer of the mobile number.
Errors returned by ID API